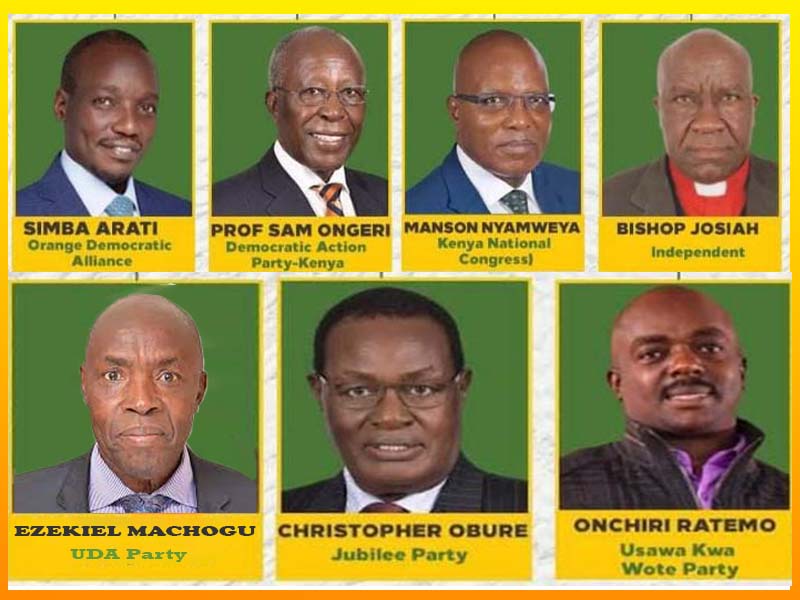 A total of 7 aspiring Kisii County governors showed up at Kamel Park Hotel on Sunday, July 17th, 2022, for the much-awaited debate. On the moderating Bench were renowned Egesa FM journalists Sorobi Moturi Erastus and Lawrence Nyakundi. We take a closer look at newsmakers from the recently held Kisii gubernatorial debate.

The live coverage debate which started at 7 pm lasted for hours amid clapping and heckling. In attendance were hundreds of curious political supporters from across the county.

Enlisted below are 7 aspiring governors who showed up to defend their manifestos.

These honourable members answered questions on 7 key sectors of the economy including;

Candidates were given a maximum of 3 minutes to express themselves on each of the above-mentioned.

Dagoretti North MP Simba Arati started by narrating a brief story about his father Mr Arati who was a hardworking tea and coffee farmer.

He went on to attack the defunct Kisii coffee farming before promising to revive all the 28 defunct coffee factories.

He also vowed to fight poverty by recovering hectares of the grabbed public land in the county.

Arati said his government will emphasize a good relationship with all MCA and essential service providers such as healthcare workers.

On matters of garbage, he intends to recycle garbage for a constant supply of organic manure and electricity.

In the end, Arati declined to answer the question of conceding defeat saying he does not have a language of defeat.

Nyaribari Masaba member of parliament born 64 years ago is an alumna of Nduru Secondary and Agoro Sare High School.

After graduating from the University of Nairobi, Machogu became a district officer. He has since worked in several government positions.

Machogu continued to distance himself from alleged corruption involvements. He was not only enraged but also tough on his noisy critics.

At first, he appeared a little tense when responding to critical questions.

Speaking about health, Machogu expressed his frustration with the services offered at the Kisii Teaching and Referral Hospital.

He promised to increase efficiency in both treatment and timely disbursement of salaries to health workers.

Finally, Machogu said there will only remain peace in Kisii County if the elections are held transparently.

Ongeri presented himself as the most experienced and qualified leader for the position of governor in Kisii County.

The professor was particularly critical of locally available cash crops such as bananas, avocado, and sugarcane.

He suggested that his government will emphasize value addition as well as the elimination of supply chain cartels.

Ongeri said he is ready to accept fair results without proceeding to the courts.

Obure suggested the introduction of modern farming techniques as the only way of ensuring food security.

In addition, he cited old technology as the main challenge crippling corporate societies in Gusiiland.

Furthermore, Obure says he will devolve core services to the sub-county level for greater efficiency.

He relies on his extended experience as a civil servant to implement good leadership.

He schooled at Cardinal Otunga and Kisii High school before proceeding to the University of Nairobi for a bachelor’s degree in Medicine and Surgery.

Thereafter, Ratemo earned a scholarship for further studies in the United States of America. He would return to Kenya to start his career.

Ratemo noted that 90 per cent of Kisii people earn a living from farming but in unsustainable ways.

Speaking about sugarcane farmers in South Mugirango, Onchiri promised operational jaggeries in every ward by the end of December 2022.

He also proposed the formulation of the Kisii Banana Agency as a way of eliminating profit-thirsty brokers.

When it comes to urban planning, Onchiri intends to relocate agricultural headquarters to Keumbu, the governor’s residence to Suneka town, and the recreation centre to Nsaria Hills in Bonchari.

Onyancha from Boochi Borabu in Kenyenya sub-county is a father of four. He is a retired teacher trained to the PhD level to become a reverend.

Aspiring governor Josiah said his number one priority will be health and agriculture.

As governor, he vowed to increase payment and avail it in time, especially for staff members with technical skills.

He thinks of himself as a candidate with the highest level of integrity.

Responding to the question of environmental planning, Bishop Onyancha vowed to demolish properties on riparian land within his first day in office.

In his last words, Onyancha said he is ready to win or concede defeat after the August polls.

Manson introduced himself as a successful businessman married to a medical doctor spouse with the firstborn son living in Chicago USA and the second born daughter in London.

He promised to deliver robust IT systems to cub overpricing and misuse of drugs meant for patients.

He also promised health professionals better pay for the good work they are doing.

On garbage management and planning, Oyongo intends to contract an investor for the recycling of waste.

Similarly, he intends to regulate reckless boda boda riders, matatu drivers, and the use of green energy.

Asked if he will concede defeat, Oyongo said he will only back down if the election will be free and fair.

Apart from airing live on Egesa FM Radio, the debate was featured by Inka TV, Radio Vuna, and renowned Youtubers such as Maruko.

At the centre stage of the debate was Egesa FM Head of Radio Nancy Kwamboka Nana Ediva.

Watch the Kisii Gubernatorial debate video live on YouTube for real-time updates on what your favourite candidate about his manifesto.