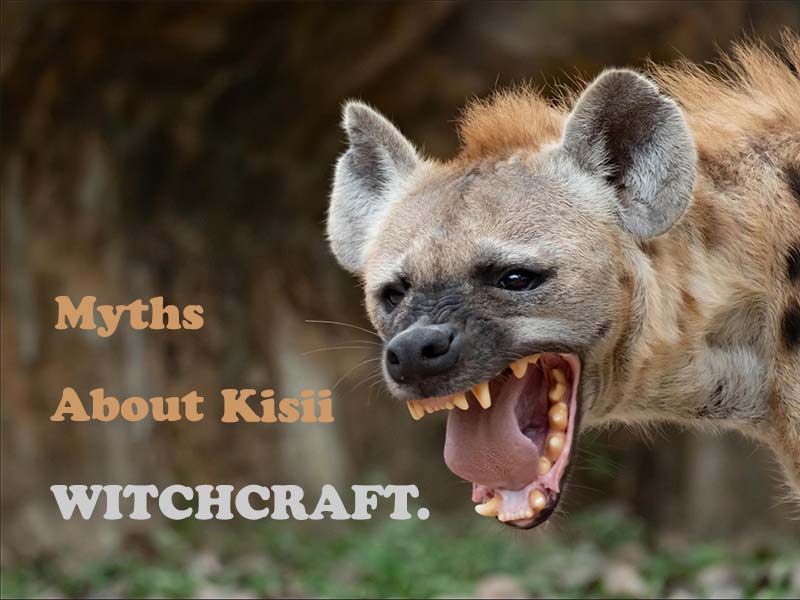 The Kisii people are common place in Kenya with a population of 2 million and some more in diaspora. The tribesmen are famous for all the good reasons including artistic soapstone carvings and flavourful giant bananas. Looking beyond these heritages are disturbing myths about witchcraft in Kisii County.

Witch doctors, sorcerers, and mediums have long enjoyed a place in the Kisii culture and traditions. For this reason, it not easy growing up in the dark ends of Kisii villages because of exceeding fear and terror caused by suspected witches.

10 myths about witchcraft in Kisii Kenya

Suspected Kisii witchcraft is part of the secret societies which prefer to uphold high levels of secrecy.

One can go unpunished for thinking that witchcraft is an equivalent of Illuminati, but with less geometry and mathematics.

Sadly, not much is confirmed openly about Wachawi Kisii apart from these 10 myths.

1. Kisii witches use hyena as a means of transport in the dark

Stories of witches from Gusii land riding on the back of hyenas at night are both scary and unbelievable.

That is perhaps why a mention of the name hyena is enough to raise eyebrows in any Abagusii audience.

2. Crying cats, bats, and some herbs in the myths about witchcraft in Kisii

Tales of witches having the ability to manipulate cats into other forms such as people and objects are still alive today.

Therefore, Gusii locals tremble whenever cats are crying, especially at night, on the assumption that the most deadly witches are on duty.

3. Covens keep a black book and are democratic in their elections

Witchcraft and sorcery in Gusii community are allegedly on another level with all formalities included.

For instance, covens of witches keep a black book in which they update minutes as discussed in every meeting.

Recorded in the book are elected leaders and their roles from the rank of a chairman to a secretary and treasurer.

4. Witches meet in the dark to haunt humans

The fear of darkness is largely because of lurking dangers including witches.

Posts by nrp.com and Silas Nyanchwani of kenya-today.com imply that Kisii witches play a role in plotting mysterious deaths.

In his post, Nyanchwani describes how a meeting of Kisii night runners held in a local primary schools ended with a forgotten black book.

In the discovered black book of witches were familiar names including those from recent deaths, upcoming deaths, and voted causes-of-death alongside entries.

The celebrated npr.org also reported the same story to the international audience, with a closer focus on the resulting extra-judicial killings.

5. Witchcraft is hereditary – myths about witchcraft in Kisii

Kisii people believe that witchcraft and related forms of evil flow within the family blood and can last for generations.

Because of this, elderly Gusii witches train their children and grandchildren to ensure continuity.

Meanwhile, burning and lynching of suspected witches are still far from providing a lasting solution on increasing levels of superstition in Africa.

6. Kisii witches are among your most trusted religious people

How does a witch craft look like? Many people perceive witches as taking the appearance of a devil, wrapped in hide skins and feathers.

On the contrary, there is a belief that witch craft are ordinary people going about their lives without a slightest suspicion.

That is no surprise because many staunch Christians and church leaders in Kisii land are top in the list of suspected witches.

Many residents believe that human sacrifice is a qualification of enrolling in the cult of witchcraft.

That is why Abagusii people would rather stay in peace with suspected witches instead of provoking them and risking becoming sacrificed.

8. The cult of witchcraft is only powerful within the Kisii tribe

Cults affects those who belief in them and have no power on their non-believers.

This is the case with Kisii witch craft, which is powerful among residents and of no effect on those from other parts of the country.

Even so, metropolitan cities and cross-marriages are spreading the power of various forms of Kisii witchcraft outside Gusiiland.

9. The witches of Kisii can influence outcomes

Witchcraft is the use of dark powers to influence the unknown world towards those with selfish interests.

Some Kisii locals have long believed that witchcraft can influence crop production and improve student performance.

Unfortunately, suspected witches are the poorest achievers and worst performers in Kisii and Nyamira Counties.

10. Fearing the Godly among myths about witchcraft in Kisii

Stories of ghost possessed people fearing the name of Jesus are a relief to those living in witchcraft affected villages.

Overall, strong believers in God report little to no suffering in the hands of witches, sorcerers, witch doctors, and night runners.

What do you mean by witchcraft?

Witchcraft is the practise or use of supernatural powers to gain control over people and events.

It includes mysterious practises such as sorcery and magic, surrounded with a firm system of beliefs.

Is witchcraft illegal in Kenya?

The use and practise of witchcraft is illegal in the constitution of Kenya 2010.

All forms of bewitching, charms, and sorcery related injuries are against the law.

Is there witchcraft in Kenya? Yes, most tribes in Kenya practise witchcraft, but in different forms, whether traditional or civilised.

Elsewhere, you may have heard about prominent Kenyan businessmen and politicians turning to witchcraft in times of crisis.

Which is the most witchcraft tribe in Kenya?

The most superstitious and notorious witchcraft tribes in Kenya include Kamba, Luo, Luhya, and Kisii.

It is no secret that many cultures and traditions around the world are founded on witchcraft related systems.

Various facts and myths about witchcraft in Kisii Kenya are worrisome. They reveal how our society is torn apart with an inbuilt desire to control other people and the outcome of events.