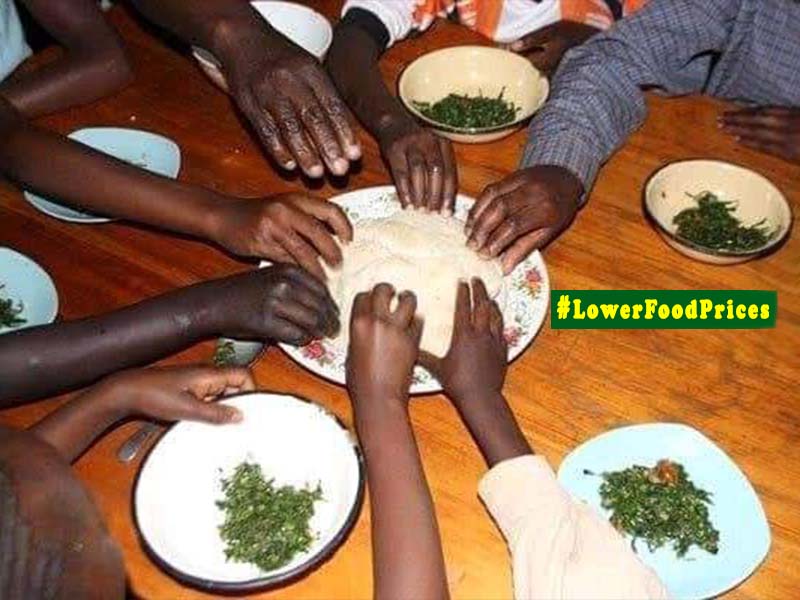 Enraged Kenyans have taken to social media to protest steadily rising food prices in the country. The war which started on Twitter a few day days ago has since entered mainstream media. The Lower Food Prices protest is one of its kind at a time when jobs are scarce and the economy at its knees.

The ongoing inflation which sparked about two years ago is unlikely to end any time soon. The most affected everyday products are cooking oil, maize flour, sugar, and LPG cooking gas. The pinch is getting more painful by the day amid heated politics.

Recent statistics from the Kenya National Bureau of Statistics indicate that the cost of basic commodities increased by 8.89 percent in January.

The figure could be higher today given spontaneous price hikes. Up to this point, a majority of Kenyans are afraid of their survival in days to come.

The most hurt are low-income families in which placing food on the table is already problematic.

A Twitter user called Atieno Nyar Asego cannot understand why politicians are busy with campaigns without minding the cost of living.

She had to say in response to higher price tags on consumable products.

“How Cooking oil is 3 times expensive than Super Petrol is what I don’t understand. And the President is here preparing for Sagan 3, is political meeting important than the lives of Kenyans? Akili Kichwani…#lowerfoodprices.”

On her side, Lilian Kawira is worried about the declining value of Kenyan money.

Too bad for her, because the old good days when Ksh. 1,000 could afford a decent shopping are over.

“I don’t care who occupies state House this year. I am concerned that 1,000 shillings can’t buy basic things for my family to last two days #lowerfoodprices.”

Ja Loka on the other hand feels that a Twitter trend is not enough to end the economic crisis. He prefers a strike to all other strategies such as #lowerfarminputprices.

“We should conduct a nation wide strike, Twitter trend isn’t enough. we can’t be buying 1kg of cooking oil at ksh290 and Sugar at ksh250 bana. Kenya isn’t a country. There is no equality in this country. The poor are starving 😭 #lowerfoodprices.”

Finally, the economic recession is part of the country’s continued effort to recover from the COVID 19 pandemic. Even worse, hefty national loans amounting to Ksh. 11.7 trillion.