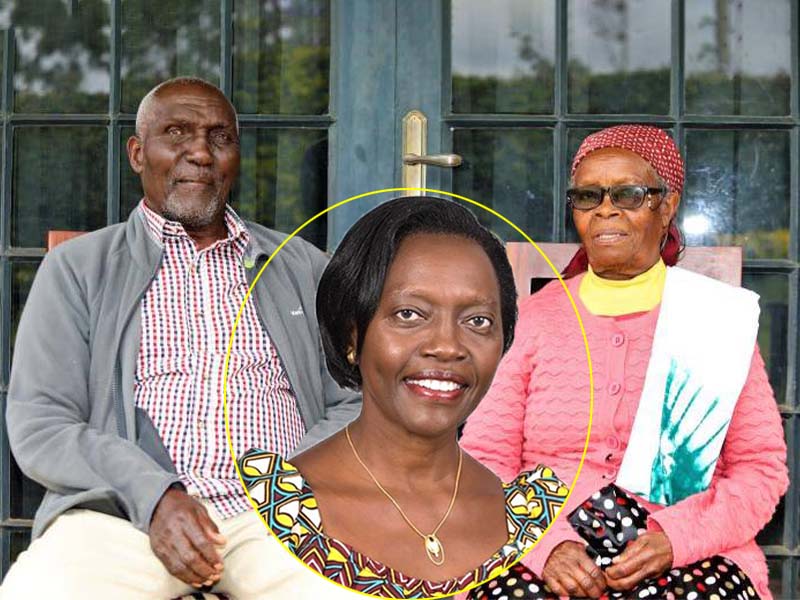 Martha Karua Parents are on the eve of celebrating their daughter following a historic appointment as running mate for the fifth time presidential aspirant Raila Amolo Odinga. Also sharing in the jubilation are his siblings and close relatives. We take a closer look at the less known Martha Karua Family Tree.

Sources say the family members did not expect their own to win the deputy president ticket in the celebrated Azimio La Umoja coalition. Trounced rivals include Wiper Party Leader Kalonzo Musyoka and Peter Kenneth of the Kenya National Congress.

Both her parents are alive and celebrating the successes of their celebrity daughter.

Both parents agree that Martha is a readily hardworking, obedient, and polite lady.

Mr Jackson Karua is a charismatic man of about 90 years.

This is what the patriarch said about her daughter following a rapid uprising into national politics.

“I am very excited because I did not expect this. I did not think I would see the day when she would become a running mate: it had never crossed my mind and as a father, I praise God because he is the one who made this to be.”

A show of gratitude on his face is enough to spell the joy engraved deep in his heart.

Rumors that she is daughter of the late Samuel Amalemba remain unconfirmed.

The matriarch is a trained teacher who left her career to concentrate on marriage several years ago.

She had this to say about her daughter’s appointment into the position of Azimio La Umoja running mate.

She is confident that her daughter is the right candidate to wipe out corruption and restore sanity in Kenyan politics.

In the progressive Karua family are four sons and four daughters pursuing different careers and interests.

Her younger brother who spoke whilst fighting back the tears of happiness had this to say.

“My sister has charted her own way into the political level but we never thought it would reach that level but God has been gracious she has become what she is today.”

Like most of the family members, Nyage is convinced her sister will deliver integrity if elected in the fast-approaching August polls.

So far, her sister Loice Wanjiku Karua is the most supportive sibling in her political engagements.

Martha Karua Family Tree introduces us to the strongest woman in the country. Her determination to rewrite history is particularly moving.