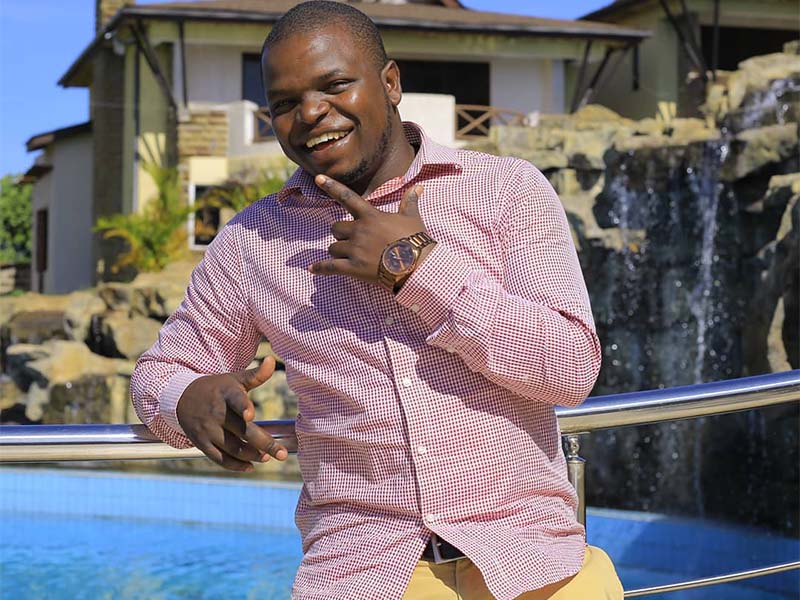 Okiondo is a famous Kisii comedian, actor, scriptwriter, and businessperson with critical roles in Ndizi TV videos and movies. The highlights in the Okiondo biography will interest you.

Okiondo is the best comic character among Ndizi TV fans. Besides, he is the starring actor at the Okiondo show. We all love his sweeping laughter and a preservative lifestyle, which brings out a Kisii man’s typical character.

Hannington is famous for appearing in Ndizi TV short videos and movies. The multi-talented actor is also a Kisii celebrity through his fast upcoming Okiondo show.

The famous Okiondo TV host comes from a humble background. Unfortunately, he became an orphan at a young age.

He lost a father at age seven and a mother when he was barely in class four. The experience left scars on his life, which took years to heal.

Okiondo recalls passing through a tormenting childhood with envious experiences. His guardian grandmother could not afford much for him.

Okiondo was born in the 80s at Nyangena near Eden View Academy. He prefers the names Matoke and Okiondo to Hannington.

He teasingly revealed to Harriet Isaac of the Gusii Celebrity News and Catch Up that his name Hannington has never earned him a slice of bread. Possibly, that is why he is not into the name, at least in the public scenes.

Your favourite comedian started schooling at Nyangena Greenville Academy. A lack of school fees left him transferring to Nyamokenye Primary school in Bonchari, Bogiakumo, as he joined class one.

It class three, Okiondo transferred to Daraja Mbili primary school. The long-distance from his home to Nyamokenye may have influenced his decision.

The artist later moved to Nyakungu primary, where he sat for his KCPE exams. The latter-transfer was so that he could shine to a better secondary school.

During his time, people believed that sitting for an exam is a less competitive school was an added advantage in the high school selection exercise.

Okiondo biography reveals that he excelled in his exams. However, finances became a limiting factor as he was about to join the secondary school of his dream.

As a result, he resolved to join Itierio mixed secondary school.

When he was in form three, Okiondo transferred to Nyanchwa Government High school following a disciplinary case. Notice that at this time, he had started becoming the joker he is today.

It is at Nyanchwa that Okiondo completed his KCSE examinations.

Life turned out a mess for Okiondo, who ended up frustrated in Nairobi with a fake scholarship. The Foundation Institute of Africa (now closed) welcomed him for studies but closed soon after.

After a bad experience with the Foundation Institute of Africa scholarship, Okiondo transferred to Manheim International College for music studies.

He proceeded to launch his career immediately after graduation.

The actor had an interest in farming at first but faced scarcity of land as the main challenge. He would later switch to becoming a joker.

He has over time been able to work with top Kisii artists such as Miggy Champ, Babu Gee, Embarambamba and more.

Okiondo biography on hassling in Nairobi

Okiondo worked as a part-time waiter in a Nairobi based restaurant during his college days.

After that, he relocated to Kayole and tried his luck with set book performance.

Luckily, the new opportunity worked out enabling him to explore Kenya. He managed to visit several secondary schools across the country.

In 2010, Okiondo founded his own Artspan Inc. Production Company in line with set books performance. He later moved back to Kisii for a full time career in theater and set book acting.

His stay in Kisii quickly exposed him to peer actors such as Makumba and Osoro. The trio approached a camera operator, Harrison Moenga, for their debut Kisii film, Obokabara.

Okiondo has since grown his experience as a stage performer, stage director, scriptwriter, and actor. for this reason, he is by far the most influential Ndizi TV actor. Even so, the YouTube Okiondo show is slowly catching the flame.

If you have been following Ndizi TV latest episodes, then you know Okiondo better. He is the man of action, never failing when it comes to producing original scenes. Some of his work include;

Also, there is a selection of rib-cracking Okiondo na Antivirus videos that you don’t want to miss.

Information about Okiondo girlfriend remains in the shadows. However, he has previously talked about being a single father of two.

The two, daughter and son, are from different baby mamas. Okiondo daughter is 11 years old while the son is way younger.

Okiondo received the beautiful baby girl with an unnamed baby mama, shortly after high school. He is now raising both children by himself.

Besides enjoying the company of friends, Okiondo is a responsible family man with a thing about delicacies.

Like most Kisii men, he loves Samaki, daily, cuddled milk, and all time favourite dessert – avocado.

Give him a call to book him for a show, hire his services, or request to work with him. Overall, Okiondo is a creative actor now featuring in the list of Gusii Creative Awards 2020 contestants.

Okiondo biography is full of surprising tales from the depths of life. Fans have every reason to appreciate him for the struggles and successes. Hannington Matoke, aka Okiondo, is undoubtedly the most promising Kisii actor in days to come.