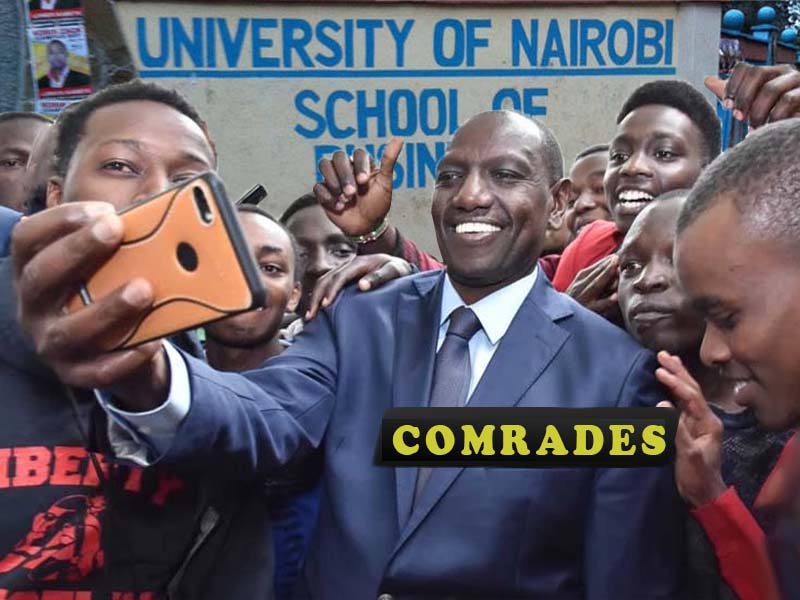 President William Ruto education background dates back to the early 80s in a forgotten village within the steep edges of the Rift Valley. He would attend local primary and secondary schools before relocating to the capital city for further studies.

A childhood classmate Truphosa Chebatip says that Ruto was not always a bright student. she recently disclosed how the head of state used to struggle with among other subjects, English. On a fateful day, excessive canning forced Ruto to sneak and find refuge in his sister’s home. Most importantly, Ruto was a calm student with an appetite for good grades in science related subjects.

It is Kamagut Primary school where the Ruto schooled alongside his childhood friend Truphosa Chebatip.

“When he came back, we learnt a Luhya song and in 1978 we sang for President Moi during his visits. To date, I can remember the song. Ruto together with another student also sang the song another time and they were taken to Eldoret.”

In an interview on Standard Digital, Truphosa intimated that Ruto was an ordinary barefoot boy from a humble background.

“We used to have one pair of uniforms. It was colour blue. We never had soap and one time everybody in the class caught beg bugs… I was the bell ringer but Ruto did not have any post. However, he was very polite despite having no post… When we were in class 5, the English teacher canned us until Ruto decided to flee to his sister’s home in Ziwa.”

The cheerful Truphosa still remembers the day when she performed for President Moi alongside Ruto.

“When he came back, we learnt a Luhya song and in 1978 we sang for President Moi during his visits. To date, I can remember the song. Ruto together with another student also sang the song another time and they were taken to Eldoret.”

In 1990, Ruto graduated from the University of Nairobi with a Bachelor’s Degree in Botany and Zoology.

On resuming his studies, Ruto graduated in 2011 with a Masters’ Degree in Plant Ecology – his thesis is still available on the varsity portal.

“Biological and physico-chemical status of two wetlands in the Nairobi National Park, Kenya.”

In 2018, he earned a PhD in Plant Ecology. William Ruto PhD thesis PDF was titled:

As we speak, the fifth President of Kenya is the most learned Commander in Chief of the Armed Forces.

It is at the University of Nairobi where Ruto met and married his love life Rachel Chebet. They have since sired seven children excluding Abby Cherop from his baby mama Prisca Chemutai.

President William Ruto education history is not only admirable but also motivating for a political leader of his calibre. Rising from a village chicken seller to president wraps it all.