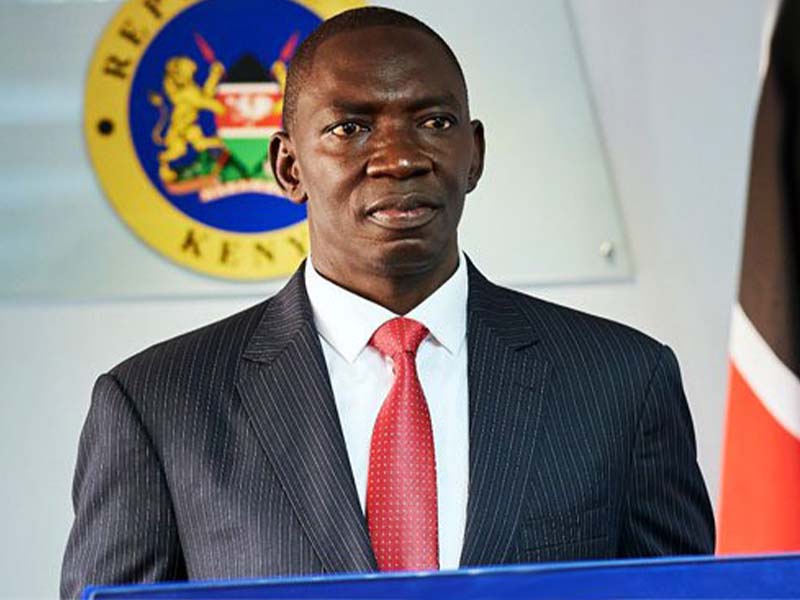 Cyrus Oguna is a vocal spokesman in the government of Kenya. He succeeded Erick Kiraithe, who has since transferred to become an ICT Principal Administrative Secretary. We have summarised Odhiambo Cyrus Oguna biography with a sharp focus on his life story, military career, and latest duties.

Working close to the executive arm of government has placed Oguna on the spot. Kenyans are as a result, curious to know more about his profile. Behind routine briefings is an interesting autobiography of the retired colonel.

Cyrus Oguna is a man of his word with years of experience in the communication department.

Who is Cyrus Oguna? The eloquent and intelligent man Oguna is a high tanking government official, in charge of public relations and briefings.

Some Kenyans mistake him for Silas Oguna, but his profile records Cyrus Oguna.

How old is Cyrus Oguna?

Kenyan government spokesman Odhiambo Cyrus Oguna age is about 50 years. No reliable records are available to confirm his birthday and born year.

Cyrus Oguna home County is Siaya in the western parts of Kenya. His ethnicity is Luo.

Col Oguna attended the University of Nairobi for a Master of Arts Degree in Political Science.

Further sources allege that he is ongoing with another Master’s Degree in International studies at UoN.

Cyrus Oguna is also an alumni of the National Defence College where he acquired additional military skills.

While at the National Defence College, Oguna attracted several awards and medals, among them, Moran of the order of the Burning Spear (MBS).

Oguna Cyrus comes from a humble family of five siblings. His parents are, however, deceased.

On the other hand, the colonel lost his loving mother, Mama Joyce Okello Oguna, in 2018.

Col Cyrus is the only son in the Oguna family, which has four daughters.

The Ogunas are all successful in various professions, but prefer keeping a low key altogether.

Odhiambo Oguna Cyrus is family man with a beautiful wife and two lovely children. Not much info is available about his spouse, wedding, and marriage.

Besides, Oguna is yet to release photos of his wife, 2 children, and other family members.

Oguna joined the military and worked in the forces for several years before surfacing on our screens.

Cyrus Oguna, who was previously a spokesman in the Kenyan Defence Forces, excited Kenyans for his skill in communication.

2011 is the year that Oguna started making headlines even as the Operation Linda Nchi was catching flames.

He maintained the celebrity status between 2011 and 2013, after which he was re-deployed.

Throughout the period, Oguna kept the nation calm even as Kenya’s disciplined KDF Officers were ongoing with the deadly Kismayo operations.

Cyrus Oguna became a defence advisor in 2014 and served until 2017. He was then an attache at the Kenya’s High Commission, within the United Republic of Tanzania.

The highly skilled Oguna has served in different offices within the military. These include personnel management, training operations, and communication.

In addition, he served as a Joint National and Resource Mapping Project spokesperson until 2019.

Joe Mucheru, the Cabinet Secretary of Information, Communication and Technology (ICT) appointed him to the post in honour of his previous record.

Oguna took over from Erick Kiraithe, who had served in the office for less than a year starting August 2018.

The office of a government spokesman entails gathering and disseminating information.

It is a source of clarifications whenever issues of public interest are not articulate enough.

For this reason, Oguna is in charge of government news gathering hotspots such as MyGov and the Kenya News Agency.

Oguna has been actively doing his part in combating the spread of coronavirus. For instance, he recently warned those boarding crowded matatu against the blunt of corona.

He executed the role successfully amid #unlockourcountry outcries from affected citizens.

Oguna is also on the fore front of promoting government policies and adding weight to their implementation.

Odhiambo Cyrus Oguna is a millionaire with a steady income stream and tokens of allowances.

The Salaries and Remuneration Commission indicates a six figure salary for government spokespersons.

The exact figures of Cyrus Oguna’s salary, allowances, and net income are not yet public.

We will update information about his investments, assets, properties, houses, and costly cars as soon as disclosed.

Cyrus Oguna is a role model to many young people interested in the forces. Moreover, he is a smart gentleman with an infectious appeal.

In summary, Oguna Cyrus is in charge of elaborating government orders. He also acts as an intermediary between the public and state.

Odhiambo Cyrus Oguna biography describes a government official who has risked his life for the well-being of citizens. Indeed, the retired colonel commands a legacy of excellence in his line of duty.