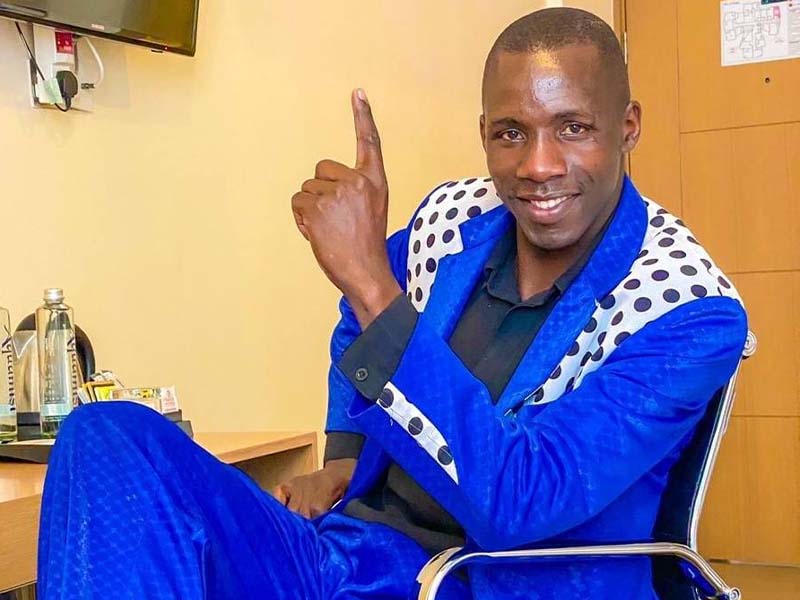 Chris Embarambamba whose real names are Christopher Nyangwara Mosioma is challenging the norms of music with an irresistible approach. The 33 years old has gone international with his funny antics and colourful suits. Various facts about Chris Embarambamba tells of a man in love with what he does best.

Have you listened to Embarambamba songs or even better watched his new videos? Well, the acrobatic musician is never short of monkey tricks on tree branches and in banana plantations. He also seems to have an undying connection with pools of mud. Moreover, Embarambamba is a comic superhuman, not afraid of stripping on live stage performances.

The corridors of fame are now familiar with the echoes of Chris Embarambamba songs.

Meet the funny bone on your screens now commanding a devout legion of supporters.

1. Chris Embarambamba is a Kenyan artist of the Kisii ethnicity

The Dance This Way hitmaker is a Kenyan singer and a creative offshoot. He has ancestry among Abagusii people.

Embarambamba is now a conversation starter in most parts of the world where his stints are catching wild flames.

The singer from East Africa has already attracted the diaspora community with an endless stream of comedy.

Elsewhere, many Kisii people are cheering Embarambamba’s mysterious talent. However, a section feel that the artist is painting mud on their clean legacy.

Chris started his music career as a traditional Kisii singer alongside the famous Mr Ongengo and later Man pepe Sagero.

It is now a few years since joining the Kisii gospel club chaired by Evangelist Douglas Otiso. He is still shinning his way to the top charts.

Throwing off animal hide skins for multi-coloured suits is a part of his conversion experience.

Embarambamba is a daring artist who has given his life as an experiment on the power of comedy.

His new dance moves are not only entertaining but also an expression of a natural talent struggling to find an opportunity in theatre.

4. Comedian Embarambamba is brave on activists and Ezekiel Mutua

A controversial video of Embarambamba jumping on top of a cow fuelled activist to incite the nation against him.

As a result, the video “Embarambamba live performance from the forest na ng’ombe” made more rounds on social.

These desperate Nguzo Africa activists launched a petition to have Embarambamba stopped from performing.

An official petition against Embarambamba dances addresses the following offices.

More so, the petition from Nguzo Africa spoke on behalf of those worried about Embarambamba hurting himself and those imitating his dangerous moves.

“Nguzo Africa on behalf of concerned Kenyans hereby petition the above-mentioned institutions to urgently stop the Kisii artist “Embarambamba” whose official names are Chris Mosioma from performing peculiar stunts that may affect his safety, followers and the environment”

The respected KFCB boss, Ezekiel Mutua, has condemned the artists of breaking acceptable moral standards in the art industry.

Dr. Ezekiel Mutua has even offered support to have Embarambamba quit what he describes, embarrassing theatrics for social media attention.

5. Embarambamba is a new face on national television

The overnight fame that visited Chris Embarambamba has turned him into a television personality.

More like a freelancer journalist, the dramatic singer is flapping from one media house to another.

Kenyan radio and television stations that have hosted him include Citizen TV, NTV, Radio Citizen, and Egesa FM among others.

A video of Embarambamba and Churchill Show host, Daniel Ndambuki, says no less.

6. New facts about Chris Embarambamba confirms he does not use bhang

Critics, among them activists, have been accusing Embarambamba of using hard drugs such as Bhang to add energy into his videos.

These claims have been going unanswered until recently when the newly converted Kisii gospel artist decided to answer.

In his response, Embarambamba clarified to Nyamwembe TV that he does not use drugs.

How he manages to challenge the legacy of Michael Jackson’s unimaginable dance moves is beyond us.

Chris spoke to Amina Abdi of NTV about having Douglas Otiso as his role model in the early years.

Now that he is a celebrity, Chris Embarambamba looks up to the gospel artist Bahati

Inyigwete Natorekire sensation wishes to do a collabo with Bahati. He has hinted another one with Ringtone Apoko.

Leaked photos of Chris Embarambamba wife have been trending on social media for some time now.

The gorgeous woman who washes Embarambamba’s muddy clothes is a beauty above the expectations of most Kenyans.

Embarambamba’s wife was initially a singer she left to concentrate on motherhood. The lovely couple is raising five adorable children.

9. Embarambamba is founder of the comedy gospel music genre

The long season of pain and struggles is slowly paying off with a spike of fame. The nickname, Generator ya Mungu, better describes his gospel calling.

Subscribers on Chris Embarambamba YouTube channel have been increasing steadily in the recent past.

Henceforth, the singer is close to beating the 100k subscriber mark.

Stats indicate that his new videos attracts more than 20k viewers within a day of uploading.

New style Embarambamba gospel reloaded is an example of his success on YouTube.

Christopher Nyangwara Mosioma aka Embarambamba shares a touching life story as narrated in his profile.

The singer is still holing to the guns and producing even better content for his supportive followers.

The world have never seen Embarambamba’s dance moves before. That is why he is attracting more attention than anyone else.

Meme and GIF developers are now embracing his content in their work of art.

A possible deal with Unilever’s Omo detergent is yet to materialize.

Meanwhile, Embarambamba is consistently working on new projects. He may likely win a multi-million deal before long.

Kisii music is crossing tribal borders thanks to Embarambamba and his peers including Pharry K, Smallz Lethal, Shourtie, Ringtone Apoko, and Nyashinski of Sauti Sol.

Quick facts about Chris Embarambamba have confirmed that he is a man of the people with a successful family and music career. He is an example of industrious Kenyans who can do anything to place a meal of the table.