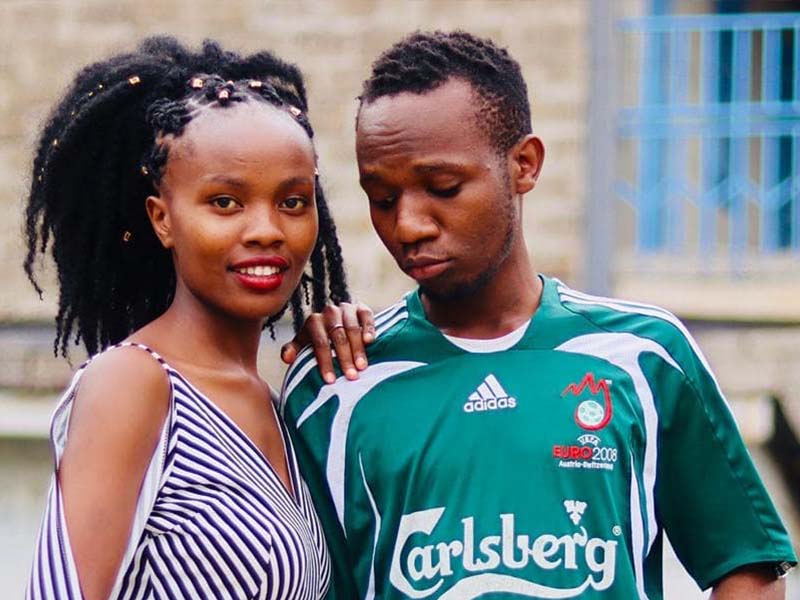 Monk Kenyan Comedian is lately trending for his sensational vines and naturally comic videos. A rapid uprising on YouTube is particularly outstanding.

The biography of comedian Monk Kenya sparks admiration, especially among talented young people without a platform. Details about his life story, real names, and those of your favourite actress Mercy Wanjiru are underway.

At first, he could not understand why classmates laughed at his funny way of saying things.

Despite the odds, Monk could entertain schoolmates in class and during break time.

Attending a village school limited his jokes to the vernacular language for he could not express himself well in Swahili and English.

Laughter, excitement, and friendships prepared him for greater creativity.

In a recent interview with Joyce Mghoi Macharia of “TOUCH OF GRACE – KE” YouTube channel, Monk revealed he did not make sense of his comedy until mid-high school.

Upon clearing the Kenya Certificate of Primary Education exams, Monk became a day scholar in a catholic sponsored secondary school nearby his ancestral home.

The institution had no entertainment and funkies as is the case in boarding schools.

In form one, Monk remained a silent comedian – mostly because of fear.

It all started with a staff member appealing to any student with a song to entertain n assembly of teachers and hundreds of students.

Monk immediately shot up, but instead of singing, dropped killer jokes. In the end, he was highly celebrated by both students and teachers. It is at this moment Monk realized he was a talented stand-up comedian.

In the second instance, Monk who was still a form two student outshined the rest in a large hall event graced by Citizen TV’s Guidance and Counselling tour.

In attendance were all students when a Citizen Television reporter called for learners with talents.

Monk and ten other comedians stood up for a steamy challenge seeking the best.

Unlike his competitors who borrowed material from Churchill Show, Monk stood out for his originality.

Asked how he develops his jokes, Monk said it is all as a result of punch lines – they come to him when busy living his life.

All he does is document them and create a captivating storyline for his audience.

Acting the role of Monk in Caucasian Chalk Circle Play earned him the stage name Monk.

On proceeding to Chuka University for higher learning, he adopted the name “Monk Kenya.”

His best show arrived in 2018 during fresher’s night. After that, he created the Channel “Monk Kenyan Comedian.” He has since garnered about 500,000 subscribers.

Speaking about challenges, he told Joyce Mghoi about his rough experience as a first-year back in 2017.

He recalls spending the entire first-year long holiday at a Mjengo site just to earn a living.

Monk Kenya credits his close friend Talagat for upgrading him from a low-quality smartphone Youtuber to a high-quality camera Youtuber at little to no pay.

Early on, Monk Kenya survived the death of his first and most passionate actress.

Luckily, he met and blended with another gorgeous looking actress Mercy Wanjiru.

Comedian Monk Kenya who is pursuing a Bachelor’s Degree in Education says YouTube is well paying.

After starting in the second year, he was able to clear third-year and fourth-year tuition fees by himself.

On top of that, he has signed multi-million deals with Melbet Kenya and realestateskenya.com to name a few.

Further details about Monk Kenyan Comedian net worth are underway.

Get in touch with Monk Kenya for personalised inquiries.

Monk Kenyan Comedian is a multi-talented Kenyan star in the calibre of jokesters Flaqo Raz and Crazy Kennar. He is slowly taking over with a new flavour of mainstream entertainment.