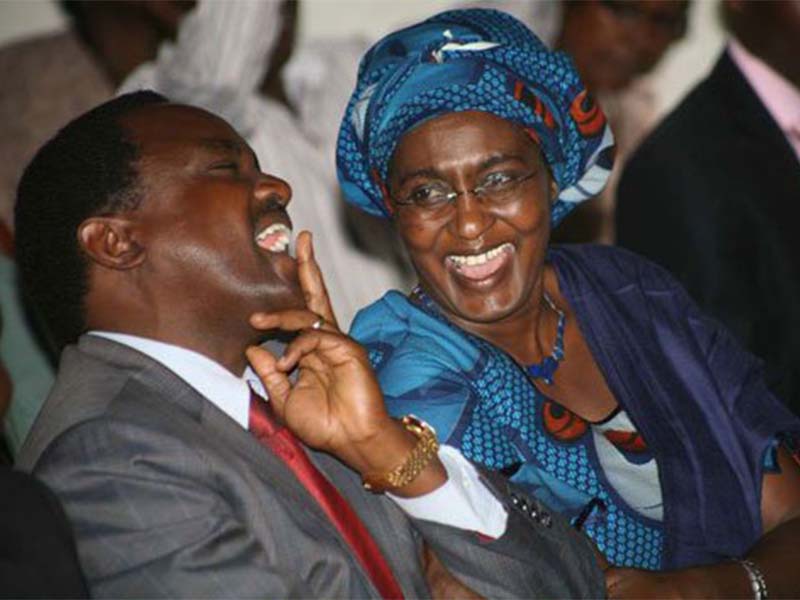 Kalonzo Musyoka wife Pauline is a beautiful and steadfast queen of low key tendencies. She is not only a virtuous lover but also a special pillar to the former vice president of Kenya and now Wiper Party leader. The life story in Pauline Musyoka biography is one of its kind.

Curious Kenyans have been asking time and again about the lady who keeps the hunky Kalonzo grounded. The answers are mostly rare because she is hardly on the headlines and in front of the cameras. That is why Kalonzo Musyoka wife photos and videos are rare.

Stephen Kalonzo Musyoka spouse Pauline is a woman of few words but with an in-depth CV.

Below are rare profile facts about her childhood, marriage, and career.

She prefers to celebrate her birthdays away from the public eye. Therefore, her born year is not yet public.

Stephen Kalonzo has previously hinted that his wife Pauline is an alumna of Mulango Girls High School in Kitui County.

However, there are no further sources on her university studies and graduation year.

3. Her ancestral home is in Kitui County

Pauline is of the Kamba tribe with a family background in Eastern Kenya.

She inherited strong Christian morals in her childhood from religious parents, father and mother.

Speaking on Maisha Magic East Story Yangu, Kalonzo Musyoka revealed on meeting the tall and smart Pauline in 1972 at a Christians Conference.

She was at the time a form two student at Mulango Secondary School. On the other hand, Kalonzo was a form five at Meru School.

Pauline who was a staunch Christian Union secretary at the time pleased Kalonzo for her gorgeous looks and exceeding confidence. True love would soon blossom.

Pauline and Kalonzo exchanged vows in a colourful wedding ceremony after dating for 13 years.

Pauline Musyoka is a proud mother of four children who are now in their adult years.

K-Deuce launched his music career in 2014 within weeks of graduating from UoN with a degree in journalism and media studies.

The song “Looking Up” featuring Dandora Music rappers is by far the best from his albums. Gracing Franco Cypher is another one of his achievements.

Secondly, another son Kennedy Musyoka has been working in the East Africa Legislative Assembly (EALA) since 2017.

Lastly, Pauline Musyoka daughter Damaris Musenya is a private lady without interest in media and politics.

7. Pauline is a senior employee at the Central Bank of Kenya

Musyoka’s wife Pauline is a banker by profession. She is a career woman with a senior position in the Central Bank of Kenya.

In addition, Pauline is a director and senior member of the Kalonzo Musyoka Foundation.

Even so, the health of Pauline has been worsening since 2015 when she was confirmed sickly of an undisclosed illness.

Pauline would visit several Kenyan hospitals for some time before proceeding to Germany for further treatment.

Top in the list of those duped by Kalonzo Musyoka wife death rumours is Machakos Governor, Alfred Mutua.

Soon after, the embattled Mutua shared an apology for sending a condolence message to the alive Pauline Musyoka.

Pauline Kalonzo wealth is at least Ksh. 100 million with several investments, business stakes, and properties worth bragging about.

Much of the whopping income drips from monthly salary at the Central Bank of Kenya and executive role at Kalonzo Musyoka Foundation.

Where is Kalonzo Musyoka wife? Pauline is nursing a recent ailment and going about life at her Karen home in Nairobi City County.

Pauline Musyoka biography portrays a powerful woman working behind the scenes for the success of her husband Kalonzo Musyoka. Above all, she is praiseworthy for her soft-spoken nature.