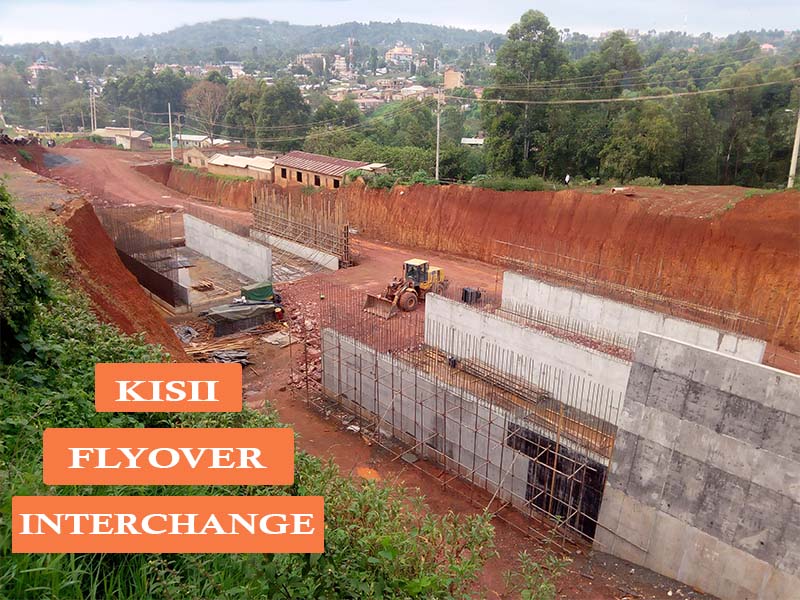 Apart from connecting towns, highways should reward travellers with scenic views and a relaxing feel. That is why passable roads are often the beauty of urban socio-economic progress. One of its kind Kisii Flyover Interchange is staging even more opportunities at the Kisii-Migori-Kisumu junction.

Ongoing road construction projects in the larger Nyanza Province are noteworthy. Even more so, the mega junction linking Kisii town to the southern, western, and northern neighbours. Well carpeted passways going through the interchange will not only minimize traffic chaos but also cement pride among the locals.

How the Kisii Flyover Interchange will trigger the Nyanza economy

The multi-million Kisii Flyover Interchange, still under construction, will likely speed up the wheel of devolution.

It has a potential of boosting the previously stagnant Nyanza economy in the following 5 ways.

Once completed, the Kisii Flyover Interchange will make it easier to enter and leave Kisii town at peak hours.

A possibility of cutting down on accidents and occasional traffic jams will be a huge step forward.

As a result, Bosongo town will become a better habitation for all.

2. It will stir Daraja Mbili Market back to live

Daraja Mbili Market which was partly relocated to Nyakoe will certainly kick back to life in a few months to come.

The interchange will surely hasten a return to normal businesses by spiking traffic in the area.

3. Multi-lane flyover to benefit the hospitality business in Kisii

The booming hospitality industry is a leading employer in Kisii town and its environs.

Leisure and pleasure resorts expected to feed directly from the interchange include the following;

4. It will strengthen the Kenya Tanzania trade relations

Kisii town is only a 2 hours’ drive to Isebania, Tanzania, about 88 kilometres southwards.

Proximity to the Ujamaa Nation makes Kisii Town a hub of good relations between Kenya and Tanzania.

That said, a dual carriage highway advancing from the Kisii Flyover to Migori and then Isebania will stimulate banana and soapstone trade across the border.

The centrality of Kisii town in Nyanza province is beneficial in its economic growth.

The interchange will no doubt streamline the supply chain and improve living standards for 1.3 million people in Kisii County.

This is because of the underway interchange construction manned by a Chinese contractor.

On the other hand, drivers heading to Migori can preferably use the Gusii Stadium, Nyanchwa, Nyabioto, Riamasagara route to avoid the dusty site.

When will be ready? Completion of the interchange will take several months depending on financial and political goodwill.

The fast approaching 2022 General Elections is part of the reasons why the project may take longer than expected.

The Kisii Flyover Interchange will open doors for economic possibilities. Most importantly, it will replace Kisumu Flyover as the largest in Nyanza.