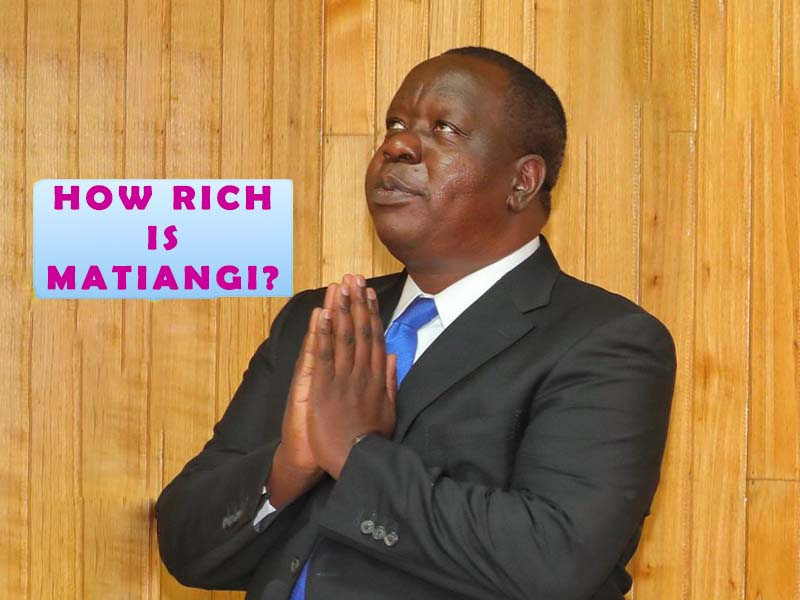 Fred Matiangi is the most hardworking Kenyan Cabinet Secretary after the later John Michuki. He is admirable for doing all the work by himself, especially in holding various government officials responsible. How much does the Super CS get in return? Dr Fred Matiangi Net Worth finally revealed.

Matiangi, a high school teacher turned lecturer, came to the limelight following an appointment as Minister of Education in 2015. He has since maintained a firm grip on power and does not seem to give it up any time soon.

Matiangi is a man of many income sources among them salary, dividends, business profits, loyalties, and proceeds from real estate properties.

A man of his calibre is also liable to several allowances and state benefits.

According to the Salaries and Remuneration Commission, the salary of Fred Matiangi is about Ksh. 1 million a month; excluding tokens of six-figure allowances.

Notice that Cabinet Secretaries are the sixth highest-paid civil servants in Kenya after the President, his Deputy, Speaker of the National Assembly, the Chief Justice, and Speaker of the Senate.

He occasionally lands in the village with choppers and at times a fleet of security escort fuel guzzlers.

On top of that is an official Karen Estate home decorated with mansions.

In 2020, Boniface Mwangi accused Matiangi of using prisoners to build his home in Karen.

“I only have one question for Dr. @FredMatiangi’ Cabinet Secretary for the Ministry of Interior and Coordination of National Security, why is he using prisoners to build his private home in Karen? That’s abuse of power. It’s also unchristian behaviour for a man who professes Christ.”

In the end, these Twitter charged accusations failed to grip.

Finally, Matiangi and Zablon Mabea co-owned a one-hectare piece of land on which a Karen-based SDA Church was erected in 2018.

Some sources allege that Matiangi is the new owner of a Kisii town CBD land on which Kisii Hotel thrived years back.

The claim remains unconfirmed amid ongoing demolitions and constructions at the site.

Matiangi wealth records show that he is a millionaire with a net worth of at least Ksh. 200 million.

Steady career progress from a secondary school English Literature teacher to a lecturer and now a senior government official is inspiring.

His current role as Cabinet Secretary for the Ministry of Interior and Coordination of National Government is particularly notable.

Fred Matiangi net worth includes an empire of unnamed businesses, shareholdings, and investments.