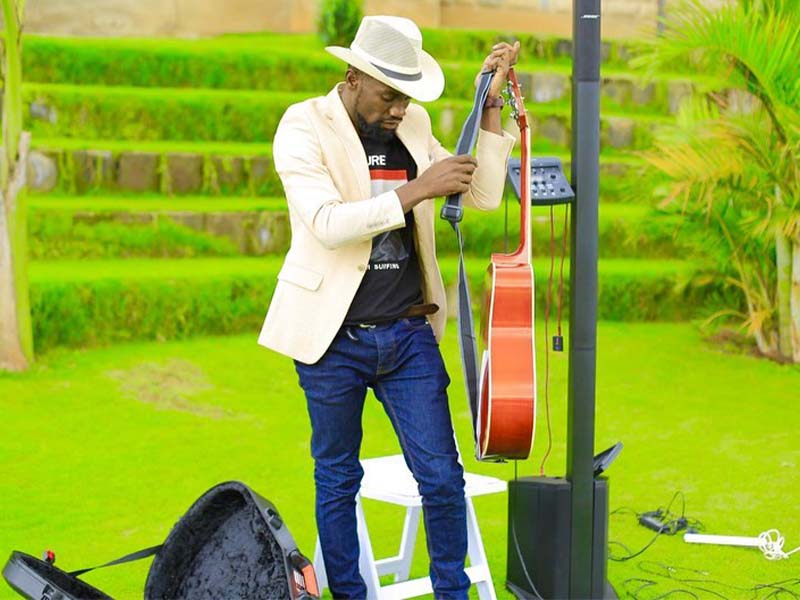 The gospel artiste has come a long way in establishing himself as a global country music icon. Even so, the award-winning musician Pharry K (Often misspelt as Phally K)  continues to entertain millions of his supporters with newer tunes.

Kepha Oyugi Bwonda is famous for his sensational tune; Pharry-K across the bridge. The song brought him to the limelight because of its appealing Jim Reeves style of play.

The 33-year-old is a Country Music gospel artist to watch in the industry. There is no denying that his raw talent and unmistaken voice are still taking him to places.

His parents have stood continuously in support of their talented son. His father, Mr Zacharia Bwonda, is a retired music and English teacher.

Unfortunately, his mother, Esther Bochere, passed on when he was barely 10.

The two parents loved gospel music but his father was more inclined to the country music genre.

The singer attended Itiero Boys High School. It is in this institution that he launched his singing career when he was about to sit for his KCSE exams.

A teaching opportunity at Cambridge International School in Doha, Qatar, came during his third year at KU.

A two-year contract-opportunity of Ksh. 80,000 (untaxed pay) interfered with his university studies.

Sources have revealed that Pharry K flew back to Kenya in 2014 before completing his teaching contract-term at Qatar.

The singer cited mistreatment as the main reason why he cancelled the contract mid-way. Besides, the salary no longer meant anything to him comparing with the pressure he was receiving at the institution.

He would later tour the United States of America. During his stay in the US, Kepha worked as a journalist and presenter for Jam Vibes Radio.

Kepha Bwonda songs are available in multiple languages, including Ekegusii, Swahili, and English. Also, he has sang dedicated hit tracks in other languages such as Kalenjin and Kamba.

Did you know that Pharry-k songs are by far the most listened in the gospel category? Find out the latest in his series of entertaining compositions.

Notably, Kepha is the notorious Kisii artiste who scooped a golden chance to pay tribute to the former head of state Daniel Toroitich Arap Moi.

Before his death, Moi often called the young singer to his home for a cheer up with the song “Where We’ll Never Grow Old.”

Hit tracks from his 2018/2019 playlist are dope. If you thought Pharry-K Peace in the Valley, Pharry K in the Garden and Pharry K Like the Birds are the only famous tracks from his albums, wait until you hear more.

Pharry K Kisii songs enjoy upfront recognition in the Kenyan music industry. As a result, he has attracted several invitations to perform in high profile celebrations.

The singer has released several albums for which he has won three awards:

The musician from Kisii County has a tightly packed schedule with more invitations and endorsements crossing his path.

Totagote hitmaker is the Chairman of the Kisii County Artistes Association. He is equally Founder, Director, and CEO at Edike General Construction Company Limited.

Pharry-K biography reveals what a music kingpin the star has become within a decade. Even with the outpouring of fame, event charges are reasonable for anyone wishing to hire him as an entertainer.

Pharry K biography and uprising spark admiration in the hearts of many. Moreso, the Gusii singer takes great pride in his raw and melodic voice. He is famous for being the Kisii Jim Reeves ~ A Black Cowboy indeed.