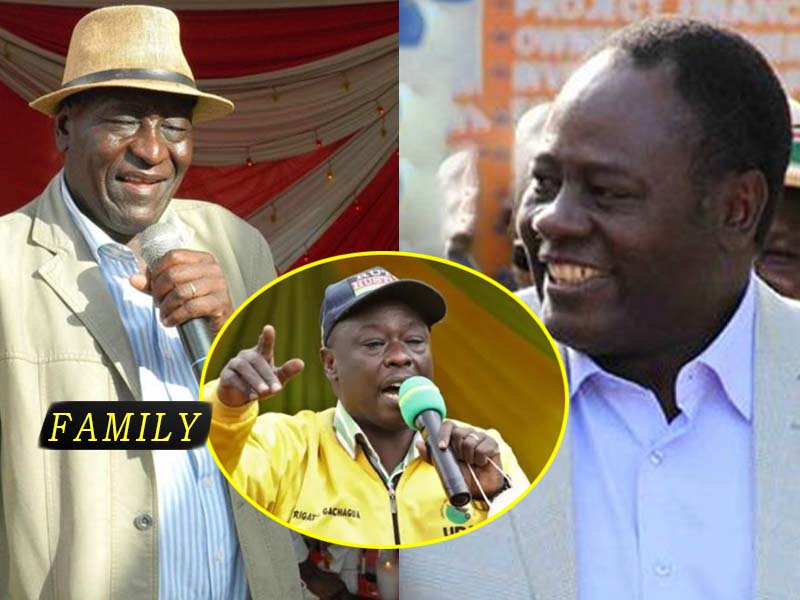 Following the dramatic inauguration ceremony leaked a series of rib-cracking memes and funny quotes. These would teach DP Gachagua an unforgettable dressing lesson. On top of that, he would sharpen his public speaking skills.

DP Gachagua has on several occasions attributed his success to his God-fearing wife Dorcas Wanjiku.

The sassy-looking Second Lady doubling as a pastor is indeed the strongest pillar by his side.

Rigathi and Dorcas are blessed with two sons among them Engineer Kevin and Doctor Keith.

“My mother went to the provincial administration offices and caused a scene, saying she would not leave until her son was admitted to Alliance High School, The officials eventually conceded and although I did not go to Alliance, I went to a better school.”

Gachagua who had scored exemplary grades ended up in a better school because of his tough-eyed mother.

For the record, both his father the late Nahashon Gachagua Reriani and the late Martha Kirigo were veteran Mau Mau fighters.

The wealthy Gachagua says growing up was tough for his brothers and sisters. He recalls sleeping in a grass thatched hat with little food on the table.

Growing up during the Mau Mau era further worsened his childhood experiences.

He recalls how his dad and mom played a key role in the struggle for independence from the British colonial master.

Spending cold nights inside Mt Kenya Forest not only earned freedom but also toughened the young Gachagua for the top position.

“My father was a technician. I used to service guns for the Mau Mau while my mother provided them with food and ammunition. I grew up in a colonial village. Those colonial villages were where the settlers put people so that they could control them.”

And now, Rigathi is grateful to God for changing his life from the status of a forest-side hustler to the second most powerful position of the executive.

He reasons that God changed his life as a testimony to those stuck in different situations – no wonder he is a staunch believer in Ruto’s Bottom-Up Economic model.

The deputy president is the eight born child in the vibrant Gachagua family with 9 siblings.

Unfortunately, Rigathi has lost a couple of his brothers among them former Nyeri Governor Nderitu Gachagua and 2013 MP aspirant James Reriani Gachagua.

Above all, DP Rigathi Gachagua Family photos suggest a humble beginning with a bright future at hand.